As in February, investors spent most of the first full trading week of March hoping for new details in U.S.-China trade negotiations. While they waited, stock benchmarks drifted downward. From Monday’s open to Friday’s close, the S&P 500 lost 2.55%, while the Dow Industrials took a 2.66% fall, and the Nasdaq Composite weakened 3.12%. The MSCI EAFE index tracking developed markets outside the U.S. and Canada fell 1.09%.

Why did stocks lose momentum? In a hint that global economic growth might be slowing, the European Central Bank abruptly reduced its 2019 Gross Domestic Product forecast for the eurozone from 1.7% to 1.1%. A disappointing reading on U.S. hiring also raised questions.

According to the Department of Labor, the economy generated only 20,000 net new jobs in February. This was the smallest monthly gain since September 2017. Nevertheless, the unemployment rate fell to 3.8%, while underemployment declined sharply to 7.3%. (These decreases could reflect furloughed federal employees returning to work.) The average wage rose 3.4% in 12 months, the largest year-over-year increase in a decade.
Harsh winter weather may have impeded hiring last month, and February’s payroll growth could be revised in the Department of Labor’s next report.

The fourth-quarter reporting season is all but over. FactSet notes that the S&P 500 has seen earnings growth of 13.4% in Q4, marking the fifth straight quarter with a double-digit rise.

Stocks lost ground last week, breaking a long string of weekly advances. The extended rally partly reflected optimism that the U.S.-China trade dispute would soon be resolved, but a deal may or may not happen. The week offered a reminder that Wall Street sees both ups and downs. Day-to-day market fluctuations should not cause you to alter your long-term approach.

Source: Econoday / MarketWatch Calendar, March 8, 2019
The content is developed from sources believed to be providing accurate information. The forecasts or forward-looking statements are based on assumptions and may not materialize. The forecasts also are subject to revision. The release of data may be delayed without notice for a variety of reasons.

Source: Morningstar.com, March 8, 2019< >Companies mentioned are for informational purposes only. It should not be considered a solicitation for the purchase or sale of the securities. Any investment should be consistent with your objectives, time frame and risk tolerance. The return and principal value of investments will fluctuate as market conditions change. When sold, investments may be worth more or less than their original cost. Companies may reschedule when they report earnings without notice. 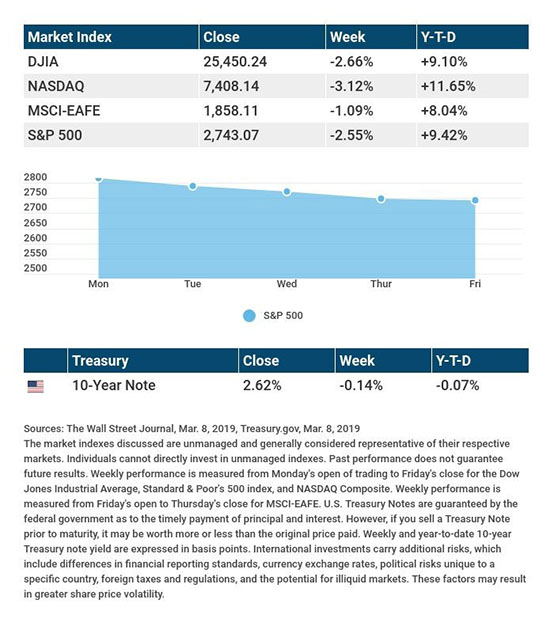