Analysts surveyed by Dow Jones Newswires had forecast 2.0% Gross Domestic Product (GDP) for the second quarter. The actual estimate, announced Friday by the Bureau of Economic Analysis, was slightly better at 2.1%.[3]

While this is the poorest quarterly GDP number since the opening quarter of 2017, the decline in GDP largely reflects a decrease in business investment. Consumer spending improved 4.3% in Q2, and government spending rose 5.0%, which was the biggest quarterly gain in a decade.[4]

This renewed effort to forge a bilateral trade pact could go on for some time. Secretary of the Treasury Steven Mnuchin, who is part of the U.S. delegation, told reporters last week that it would likely take “a few more meetings” before any kind of accord can be considered.[5]

Wednesday at about 2:00pm EST, the Federal Reserve is scheduled to conclude its July meeting. Wall Street is eager to see what the Fed will do with interest rates. The question is whether traders have priced in expectations of a cut and how they may react if no cut comes.

Source: Econoday / MarketWatch Calendar, July 26, 2019
The Econoday and MarketWatch economic calendars list upcoming U.S. economic data releases (including key economic indicators), Federal Reserve policy meetings, and speaking engagements of Federal Reserve officials. The content is developed from sources believed to be providing accurate information. The forecasts or forward-looking statements are based on assumptions and may not materialize. The forecasts also are subject to revision.

Source: Zacks, July 26, 2019
Companies mentioned are for informational purposes only. It should not be considered a solicitation for the purchase or sale of the securities. Any investment should be consistent with your objectives, time frame and risk tolerance. The return and principal value of investments will fluctuate as market conditions change. When sold, investments may be worth more or less than their original cost. Companies may reschedule when they report earnings without notice. 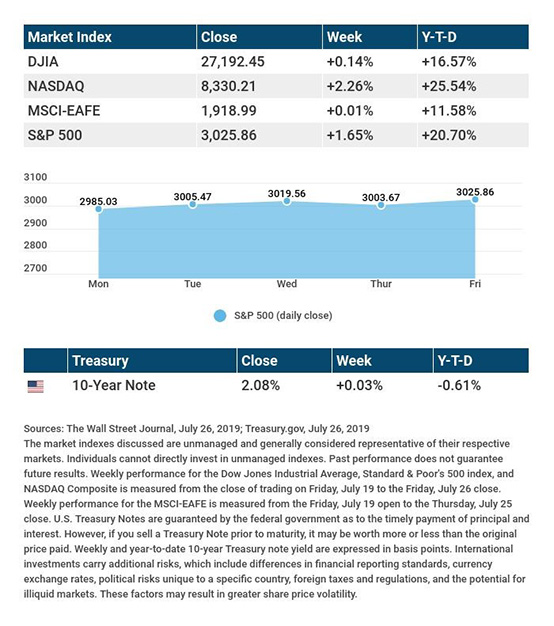