Stocks edged toward all-time peaks during a relatively calm week marked by easing trade tensions. Friday marked the eighth straight daily advance for the Dow Jones Industrial Average.[1] Small-cap shares, as tracked by the Russell 2000 index, rose 4.85% in five days. The S&P 500 improved 0.96% for the week, while the Dow and Nasdaq Composite respectively advanced 1.57% and 0.91%. Foreign shares added 1.22%, according to the MSCI EAFE index.[2][3][4]

Existing tariffs on $250 billion of Chinese imports were slated to rise from 25% to 30% on October 1, but the White House decided Thursday to postpone the increase until October 15, in a “gesture of goodwill” honoring a request from Chinese Vice Premier Liu He.

Bloomberg reported last week that some White House officials were considering an “interim” trade agreement that could pause some import taxes on Chinese products, so long as China agrees to buy specific U.S. crops and address intellectual property concerns.[5]

Last week’s conciliatory gestures between the U.S. and China influenced the bond market. By Friday’s close, the 10-year Treasury yield had climbed to 1.90%, up 0.35% for the week after a big selloff. (A rise in bond yields generally reflects a drop in bond prices.)[6]

This week, traders await the Federal Reserve’s latest policy announcement. Whether the Fed chooses to cut short-term interest rates, any guidance in the statement will be highly scrutinized, as Wall Street is eager to discern any hints about whether the Fed is prepared to continue cutting short-term rates.

Wednesday: The Federal Reserve’s policy announcement is scheduled for 2:00pm EST, and Fed chair Jerome Powell is slated to address the media at a subsequent press conference.
Thursday: The National Association of Realtors issues its August existing home sales report.

Source: Econoday / Federal Reserve, September 13, 2019
The Econoday and MarketWatch economic calendars list upcoming U.S. economic data releases (including key economic indicators), Federal Reserve policy meetings, and speaking engagements of Federal Reserve officials. The content is developed from sources believed to be providing accurate information. The forecasts or forward-looking statements are based on assumptions and may not materialize. The forecasts also are subject to revision.

Source: Zacks, September 13, 2019
Companies mentioned are for informational purposes only. It should not be considered a solicitation for the purchase or sale of the securities. Any investment should be consistent with your objectives, time frame and risk tolerance. The return and principal value of investments will fluctuate as market conditions change. When sold, investments may be worth more or less than their original cost. Companies may reschedule when they report earnings without notice. 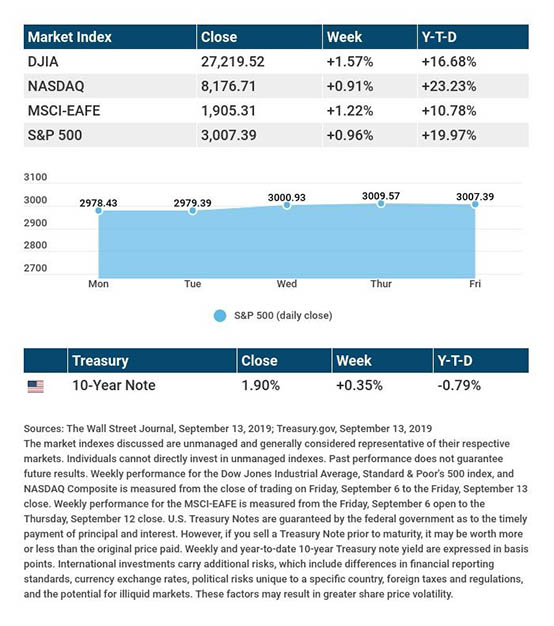